So many things to blog about, so little time. Today I want to say for the record (and let no one take me out of context), I AM INTOLERANT. Shocking I know, for those who know me. Well, let me clarify...shocking for those who know the enlightened Ingrid, not the Ingrid who thought-she-knew-everything-when-she-got-her-first-job. My intolerance stems from people who claim to promulgate the truth. Most of these folks come to life with the clamp of a thumb. They spout off from a real place, but force their will on the recipient of the information. I don't learn anything that way...How about give us an accurate accounting of what has occurred and let ME make the synthesis? Furthermore...how about if these talk-show gurus actually practice the kind of accountable talk we try to teach our kids? No, no. Instead, they keep repeating the same line, talking over the guests or colleagues, and pushing their own agenda....well...I'm tired. I'm tired of the political name-calling, the bashing, the ignorance, and the verbal bullying! There are some of us blessed with a brain...please let us use it, but please use yours as you artfully discuss topics without depleting someone else's dignity...I'm asking. I'm begging...knock it off...We, as Americans, deserve better!! I want to promulgate the seeking out of understanding. I can tolerate many things, but not the lack of seeking understanding...at least if you understand the whole picture, you can make your own decision, and I won't try to change your mind, but we'll both walk away as better people...Talk show hosts....please. Give us a model we can put up for our children to emulate. I'm not seeing much on the flat screen that I would want my kids to emulate, can we work on changing that?
Posted by Ingrid at 10:41 PM 3 comments:

Though the hour is late, and the mind is winding down, my theme is still CLARITY. As I bask, yet again, in the afterglow of another fantastic All Write Conference, I reflect on my life since 2003. I have moved multiple times. Changed jobs in the same corporation several times. Been a fellow in the Appleseed Writing Project. Started and finished a master's degree. Gotten married. And now, completed my first year as a principal. One chapter has closed, and I feel the relief of knowing the following: I will live in the same place and work in the same place next year. I'm just not sure what that will be like. My thoughts are clearer now than they have been in years, and that is all I could hope for. I can now be the wife that I should have been, the administrator that I could have been. Ahhhhhhhhh! Need I say more? Look out world, here I come.
Posted by Ingrid at 12:01 AM 1 comment:

The Cost of High-Maintenance, part deux

So, as I continue my trek toward dressing like the grown-up that I am, I make small changes. One change was the realization of the purse. I wear a lot of brown, and though the black purse I had went with "anything," wouldn't a brown purse be better, when I'm wearing brown? Thus the addition of the brown purse, followed shortly by the smaller-but-with-lots-of-pockets black purse. With the stage set, I will finish the tale...
During Winter Break, a piece of equipment was delivered to school that was damaged by the deliverer. I had informed the folks in the affected department that I would take a picture of the damage. I searched high and low for my battery charger as my camera's battery was kaput. In my searching, I looked in all the places that were logical. In a week, the damaged equipment is fixed and the camera is not necessary, however, where in the bloody heck is my charger? Finally, one night, in one of my many middle-of-the-night waking sprees, I get an idea...
I tiptoe into the dark recesses of our new closet, reach high on the shelf and retrieve nothing other than one of my new purses. One of my "logical" places, in which I had previously looked, was my purse (as I cart the charger home often)...but it never occurred to me to check more than one purse. Of course the charger was in the black purse, but I learned a valuable lesson. If you're trying to be high-maintenance, the price is constant vigilance...second case in point...I just found my driver's license in my brown purse tonight as I was emptying all it's contents. I didn't even know it was missing. Next lesson? If you're going to change purses, empty everything out before you do, 'cause you won't get back to it!
Posted by Ingrid at 10:52 PM 5 comments:

The Cost of High Maintenance

On the clothes front, I am not high maintenance. On the shoes front, I am not high maintenance. On the hair and make-up gig, I am NOT high maintenance...well, at least I didn't used to be! My maintenance comes by way of my need to socially construct my knowledge with colleagues and friends, and my desire to know as much as possible to be the best that I can be. I don't have time for clothes, shoes, and hair accessories. About a year and a half ago, I had friends over for a "what not to wear" party. I asked them (all well-dressed and pseudo-high maintenance) to help pull me out of my personal wardrobe nightmare. As it turned out, they found very few of my items that needed to "go." I was pleased to hear my buddies say that I had some nice pieces, I just needed to combine them better and get a few essentials...black jacket, black pants, yaddah, yaddah. I have been slowly collecting these, dare I say, necessities.

Now that I am at my new school, I have run into a few ladies who have given me a few fashion tips. These are ladies who sacrifice themselves for the heel. Ladies with fine coifs and a sassy fashion sense...they picked up where my what-not-to-wear friends left off. Sometimes I'll have something new on, and all I have to do is show it, and raise an eyebrow. They read my brow and give me an encouraging thumbs up, or a "you could wear that with this...." So, I continue my trek toward trying to look appropriate, but I found a cost....unfortunately time is of the essence this evening, so I can't get into it. I've got dinner to prepare and a president to watch. I will finish this tale soon, and reveal my cost for a delving into the high maintenance world...
Posted by Ingrid at 8:01 PM No comments:

The building is quiet. Everyone except Charles has gone home. Some are getting ready for tonight's Staff Party. I am here.
It's too far to go home, but I can't think about the pile of things yet to do. I know it's time to stop working when I start making mistakes!! Instead, I thought I would take the time to enjoy what I know about the people at this building--adults and students alike...
As I think about the work we are doing to become even better for the students we serve, I often think about how others think and operate. I appreciate the opportunity to get to know people and often reflect on the gifts they have to offer. In trying to express my gratitude, I have written, erased, and re-written in an attempt to capture these gifts. There is no way to show the essence of the beautiful dichotomies that each individual possesses. I love all the differences in people. How can I help everyone see each others' gifts? This is my most important question. I feel that if I can precipitate hyper-understanding, then we will accomplish our goals with even more magnitude.
Posted by Ingrid at 6:53 PM 2 comments:

The outer office is dark. The window lets gentle traffic sounds waft in. The fan intimidates the heat coming in the window enough to leave me comfortable at my desk in my new office, with my ear-buds in (Joe Jackson's, is she really going out with him.) One week down, 51 more to go as the new principal. The pace was comfortable this week. Next week will prove to be more hectic as there are many appointments in and out of the school.

I'm content with my first week. I am not filled with any poignant messages this evening--just the knowledge that what breezed by with only minor challenges will increase in its intensity with the hiring and postings that will come next week. For now, I will close the window, cut the lights, code out and enjoy a relaxing evening with friends.
Posted by Ingrid at 5:23 PM 2 comments:

Thump Bdzzz. Thump, thump bdzzz. Thump, thump. It was 90 degrees out, the AC was full blast, and my head was brimming. I glided past an Amish buggy at 55 m.p.h., with a cell phone in one hand, and rap on the radio. Yet another dichotomoy, which I love.

The past two days were the boost in the arm I needed to rejuvenate my thinking, and learning. I met new friends and connected with the old, in the austere backdrop of Shipshewana again. Though there are more thoughts in this cup, which runneth over, I will but stick only my big toe in, whilst I warm myself back up to my tiny little blogosphere. Soon, perhaps, I will insert my foot. 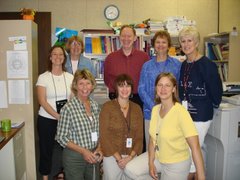 Other Blogs I Enjoy